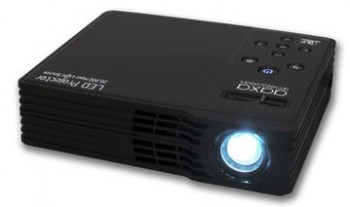 In round 3, we will be reviewing the AAXA LED Showtime 3D. The Showtime 3D comes in at a street price of $499 (AAXA). This projector cost the same as the Vivitek Q2 that we had reviewed earlier. Both projectors are fairly the same in dimensions and weight. The LED Showtime 3D weighs in at 1.5lbs and measures at 5.9 x 5.2 x 1.4 inches. The drawback of the LED Showtime 3D is that there is no official lumen count. Since there was no specific lumens that we could measure it with, we looked at the image quality that it produced extensively.

After using the Showtime for a couple hours watching a movie, we found that the image quality was very rich in colors and produced a nice image at a good distance. We were able to get over a 100 inch screen in our living room without any distortion in image quality. The LED Showtime 3D was best used when the lights where dim. With all the lights on in our room, the image produced was fairly washed out as we saw in the Vivitek Q2. However, the Showtime was stronger than the Q2 but weaker than the ML500. To our estimates, we would say that its lumen count would be somewhere between 350-400 lumens since it was brighter than the Q2.

AAXA Technologies equipped the Showtime with a full HDMI, VGA, USB, and AV port to allow connectivity to any media devices. The menu screen was very easy to navigate as with the rest of the competitors.

Overall, the LED Showtime 3D lacked in brightness as the ML500 but it made up for it with its color quality. The Showtime would be great for home theater entertainment or for business travelers.

Look out for our upcoming reviews: