The Optoma X309ST Projector is the cheapest option out of the three short-throw projectors. The 0.62:1 short-throw ratio, 3,700 ANSI Lumens brightness, and 25,000:1 contrast ratio, enable 100-inch projection from several feet away. This is ideal for small conference rooms, bed rooms, living rooms, and other space-constrained environments. The speaker is a clear, powerful audio 10W speaker, which will sound great in a small room. The main downside of this short-throw projector is the 1024×768 resolution, which is somewhat offset by the amazing 3,700 ANSI Lumens brightness at a short distance.

BenQ  is a major player in the monitor and projector space, and its TH671ST gaming and cinema projector is perfect for users looking for a short-throw projector at lower and more competitive prices. The BenQ TH671ST short-throw projector can easily replace a large TV in your living room, and it’s capable of equally delivering a satisfying gaming or cinema experience. The projector has a 1920×1080(FHD) resolution with a 3,000 ANSI lumens brightness and can project up to 100-inch picture at 5 feet away. In addition to the long list of premium features, this unit is lightweight and portable enough to take on the road or game with friends. Best of all, this projector’s price starts at $699 and comes with a three years warranty. However, I wished that the projector would come with USB-C, allowing for different options to connect and play movies from different USB-C devices. 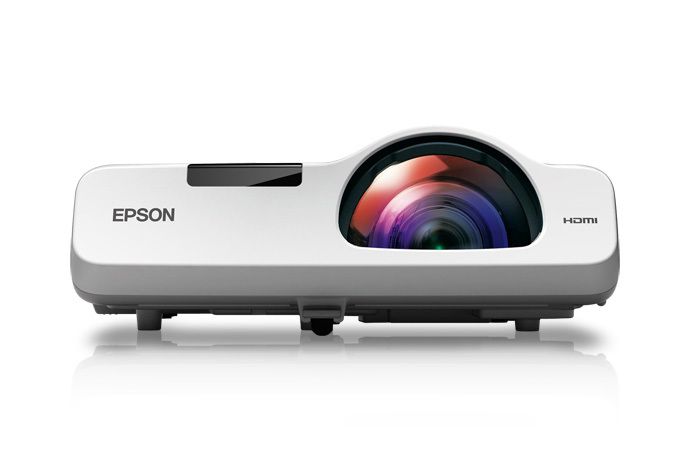 The PowerLite 530 XGA 3LCD Projector from Epson starts at $949. This short-throw projector offers 3200 lumens of color brightness (color light output) and 3200 lumens of white brightness (white light output). This short-throw projector can be mounted 4 feet away from the board or wall, and the projected image can get as large as 108″ diagonal. The PowerLite 530 also features management software which allows users to wirelessly share and play movies/pictures from the computers, as well as iOS and Android devices.