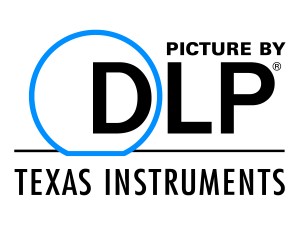 When it comes to pico projectors, Texas Instrument’s DLP technology dominates the market.  Although technologies like LCOS and Laser are still available, most major companies are making the move over to DLP due to reduced cost, increased image quality, and increased brightness.  As far as pico projectors go Texas instruments uses the same type of chip used in their cinema projectors just scaled down majorly to fit into a pico projector, this architecture is called TRP.   TRP has been around for a while but for a good amount of time now has only been capable of producing a 720p image, which needed to be scaled if the projector was going to produce a 1080p image.  The new TRP Full-HD chip can display 1080p natively without any scaling and is still the same size as the older chip.  To give you an idea of what kind of sizes we are talking about, here is a TRP chip next to a DLP chip for a cinema projector: 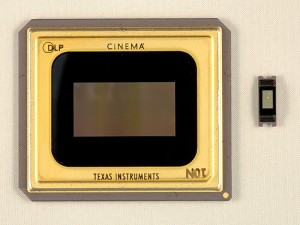 And to give you even more size comparison, here is the same chip next to some everyday objects: 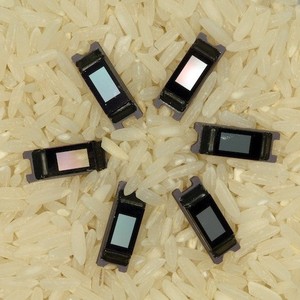 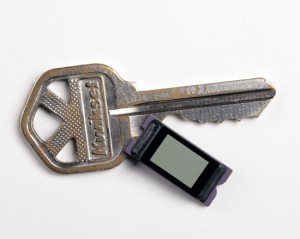 The 0.47” TRP full HD chip doesn’t only bring new image resolutions to the game, it also can work up to 100 percent brighter and up to 50 percent more power efficient than its predecessor.  Talk about a jump in specs the new chip is already lined up to be the main chip used in all pico projectors by 2015.  Currently TI has a proprietary optical engine that includes the TRP Full-HD chip available but as with all of TI’s other optical engines; it does come at an increased price.

Third party companies are already starting to produce optical engines using the new chip and are all slated to start rolling out some time in 2015.  For the average user or small company, the chip will start being available on the TI store in smaller evaluation quantities and in larger quantities from TI authorized dealers in early 2015 which means that by 2016 we’re most likely going to see a jump in pico projectors from lower resolutions to mostly 1080p.

Now for the detailed stuff, the .47-inch chip sports a 1920×1080 array of aluminum mirrors in what’s called an “orthogonal layout” which is a fancy way of saying that all of the mirrors are at right angles to each-other.  On a flat surface, each mirror has a tilt range of 5.4 microns; this small movement is what allows the chip to control the color of the pixels in the image.  The movement of the mirrors are controlled by electrical signals and move on tiny hinges and yokes that allow the 5.4 microns of movement, with small cushions on the edges to protect them:

The chip features side illumination for efficiency in brightness and to reduce the physical size of the chip.  All of the mirrors are polarized, which allows for less glare and better light management. There is also a 32-bit SubLVDS data bus available to the imaging unit for fast transfer speeds.  It’s really crazy to think that all of these features are packed into tiny mirrors that individually are less than the size of a human hair.

So as you can see, Texas instruments has taken all factors into account with this chip and improved it in ways that we didn’t even know were possible.  We’re really excited to see what kinds of products this chip can help make and also where this will take the Pico projector market.  This also opens up the door to even higher definition chips that are clearly in the future for Texas instruments.  It most likely won’t be long before we see the first 2k or 4k pico projector chip on its way out of production from TI, but until then, enjoy the new line of smaller, brighter, and more efficient 1080p pico projectors that are on their way out of development.