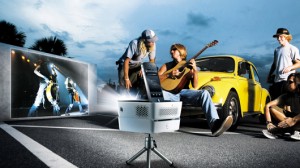 The Benq Joybee GP2 is Benq’s latest projector replacing their previous GP1 model.  It’s pretty small but not small enough to classify it into the pico range.  It is however small enough to be a micro projector.    The GP2  looks similar to the previous model as it still has the same black and white casing but the features have been greatly improved.

The BENQ Joybee GP2 features short throw projection, integrated iphone/ipod doc, a multitude of connections and an external 3hour battery pack.  Unfortunately the extra battery pack does double the size of the projector, but it is still a nifty thing to have.

The GP2 also features 200 lumens led light engine with 2 2w stereo speakers.  With its WXGA(1280×800) resolution it can be be a great viewing device.  You can now get the this micro projector for $549 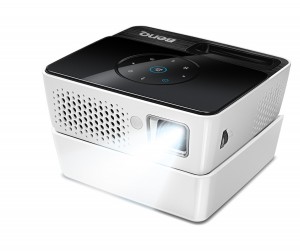